An Evening with Soprano Kateriana Fenech 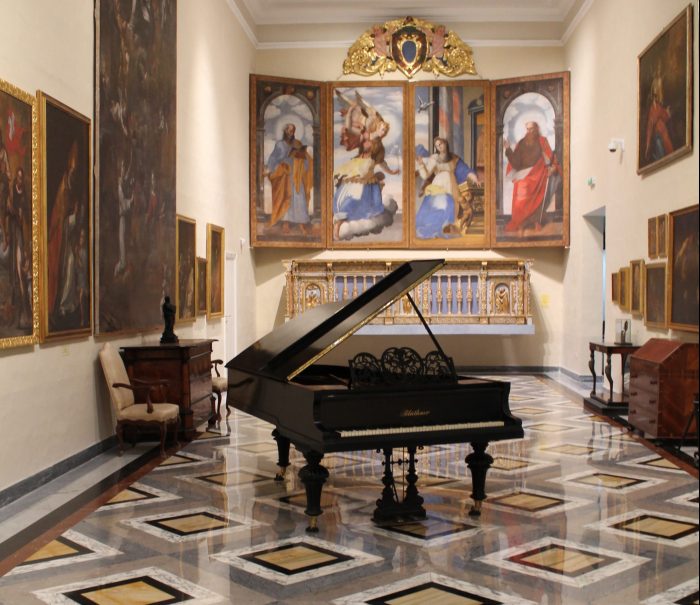 Kateriana Fenech is a highly-reputed British soprano with an extensive and successful international career in the world of song and opera. In this concert, she will showcase her remarkable versatility as she sings a variety of songs and song cycles in various languages from latter part of the 19th century into the 20th. An impressive programme (see below) has been tailored for this concert to include music by Brahms, Strauss, Dvořák, Britten, Poulenc u Weill, together with more contemporary works by Bernstein, Porter and others. 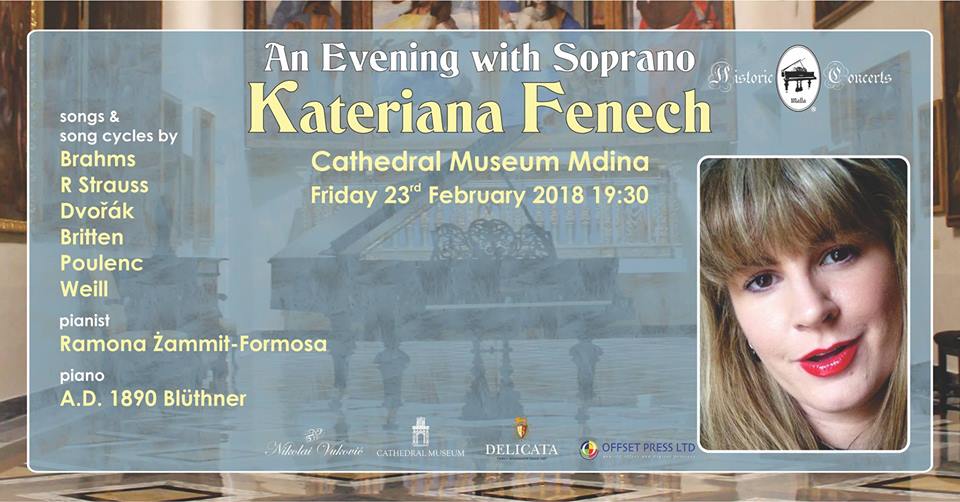 Benjamin Britten (1913-1976)
On This Island (song cycle) – Op. 11
Let the florid music praise!
Now the leaves are falling fast
Seascape
Nocturne
As It Is Plenty

Stephen Sondheim (b.1930)
No one is Alone (from the musical Into the Woods)

After performing the role of the baker’s wife in a school production of Into the Woods at Prior Park College, Kateriana was encouraged by the famous director, Sir Cameron Mackintosh, to pursue a career in singing. Kateriana entered the school of vocal studies at the Royal Northern College of Music and gained an honours music degree and, subsequently, the College’s prestigious Professional Performance Diploma. Kateriana has been awared several prizes among which the Ricordi Opera Prize, the Doherty Recital Prize and many more. Her professional opera début was with the Buxton Festival Opera when she sang Emma in Schubert’s opera Fierrabras opposite Tom Randle. In 2000, Kateriana recorded the rôle of Marie-Curie in the UK premiere of Andriessen’s De Materie for BBC Radio 3. She has sung in many operatic productions which include the rôle of Papagena in Mozart’s opera The Magic Flute and the rôle of Suzi for Moniousku’s opera Verbum Nobile. She also sang as Barbarina in Mozart’s Le nozze di Figaro on tour in the UK and subsequently at the Edinburgh Festival with Palace Opera. She was invited to sing Musetta in Puccini’s La Boheme for Clonter Opera; a rôle for which she received much critical acclaim. As a soloist, Kateriana performs throughout Europe in both secular and oratorio repertoire, most notably Mater Gloriosa in Mahler’s Symphony No. 8, Handel’s Messiah, Mozart’s Requiem and Verdi’s Requiem under the baton of Sir David Wilcocks.

Historic Piano Concerts offers a unique classical music experience through the combination of top musicians; one of the most inspiring and authentic-sounding pianos on the island – a historic A.D. 1890 Blüthner piano; and a stunning venue – the Cathedral Museum, in the heart of Malta’s medieval city of Mdina.

The main halls of the museum will be open throughout the evening and patrons will be welcome to walk around and enjoy the Art.

Wine will be served after the concert with compliments of Emmanuel Delicata Winemaker Ltd.

“…instilling interest in classical music through the use of
the forgotten and beautiful sonority of historical pianos
housed within inspirational and original venues.”